One of the key early influences on the career of Edward Bartley was Edmund Israel Matthews.

Edmund Israel Matthews was born January 1810 at Queensborough, Isle of Sheppy. In 1842 he was Foreman of works, Department of Royal Engineers, Chatham, where his brother was also employed. He was sent out to Hong Kong in 1845 and promoted to Clerk of Works.

During 1848 he was brought to Auckland to replace Government Clerk of Works, George Graham. His first work was to supervise the completion of the Albert Barracks wall.[i] This wall enclosed an area just over 21 acres in the centre of the town.

Albert Park is now laid out on part of the Barracks enclosure. The two gates opened into what is now Princes and Symonds Streets.
Inside the wall was accommodation for 900 rank and file in wooden barracks.
A stone building known as the Grenadier Barracks, housed a further 100.


The parade square was laid down in grass.
Although the citizens of Auckland had, thankfully, no cause to seek shelter behind the barrack wall, they did make use of the level green space for sports and public events.

Matthews designed and erected Wynyard Pier with the assistance of Royal Engineers and troops of the 58th Regiment.
Later he retired from service to conduct business on his own behalf as a contractor. His contacts and reliability ensured him the lion’s share of Government work. Edward was now 18 years of age.

In that year work began on the Mt Eden Gaol, under the supervision of architect Mr Reader Wood.
Matthews, with Edward under his wing, was one of the contractors involved in the construction.

Trading as Matthews and Bartley builders they were responsible for completing Rumsey's Supreme Court building in Auckland, which was originally begun by Amos and Taylor.

Edmund Matthews was one of the original eleven who formed the first Congregational Church in Auckland, under Rev MacDonald.
His wife was Elizabeth Austin PIKE, christened 1 October 1812 Brixham, Devon, England. They were the parents of five sons and two daughters:

Edmund ,Israel Matthews, his wife Elizabeth, and their infant son were interred at Symonds St Cemetery[ii]

More family information may be found at : http://www.myheritage.com/site-129822151/stewart


In 1902 the state of the Post Office and Council offices on Bank St were under discussion in Whangarei. The make-shift appearance of these public premises was felt to be inconsistent with the town's progress, as well as being unsatisfactory for their intended purpose. The County Council offices were still the original premises erected in 1878.[i]

The town was more than fifty years old. Facilities needed to be improved. Yet the Borough Council had several other calls on its resources.
The urgent need for drainage in the town would have to be met from borrowed funds.
Young people had no means to self improvement without access to library or reading room facilities; fire service and fire fighting equipment required purpose built premises; postal services, county and borough offices were all inadequately housed.

At first it was suggested that all of these accommodation issues could be resolved in a single stroke, by a brick building serving as headquarters for all these borough services.[ii] That proposal was both expensive and unrealistic for the size of the Bank St site.  It would require further borrowing for land purchase and construction.
There was another snag. County Council owned the land. Any development would have to wait until the legalities of ownership of any improvements were ironed out.

At the public meeting held on 8 September the views of the ratepayers were clearly expressed. The Mayor’s proposal for a 4 storey building, housing all services, had no support.
The gathering heard from other councillors. Endowment money was available from the Cummings estate, specifically set aside for library facilities.
There was no objection to dual- use office facilities housing both county and borough councils.
The meeting was virtually unanimous in its support for premises jointly owned and operated, provided library and reading room were included.[iii]

In October 1902 Counsellors inspected plans by Edward Bartley. [iv]There were obvious financial restrictions uppermost in their minds. Bartley’s plans satisfied those by limiting the building to two stories, in brick construction as specified.
After some discussion it was agreed that the ground floor position of the library and reading room was the best. Council meeting rooms and offices were to occupy the first floor.
Affairs moved quickly after that point. The plans were signed off and tenders called for by the end of October.[v]


The Municipal Offices and Public Library were completed and opened in July 1903.

Here we are continuing our series of posts for FLIGHT family researchers. For this research we are indebted to VINECOMBE and MISKIN and MATTHEWS descendants in Australia and USA. Thank you all for your generosity.

The fourth child born to Stephen MOORE and Elizabeth Flight was named after her mother.
Elizabeth Moore, granddaughter of Thomas Flight, was born in St Peter Port, Guernsey, Channel Islands 11 March 1805.
She married William VINECOMBE on Christmas Day 1827 at St Peter Port. For the first twelve years of their life together William and Elizabeth continued to live on Guernsey. Five of their children were born there:

Elizabeth - born 1828 St Peter Port. She died in the Coromandel Valley, South Australia 4 July 1848 after being thrown from a bullock dray in an accident.

In February 1840 the family were aboard the SS Orleana under Captain CAMERON. The travelled under the Free Passage Emigrant Scheme promoted by South Australian government. The ship arrived at Port Adelaide on 10 June of that year. Four more children were born in Australia:

Caroline Harriet - born 24 October 1840, Adelaide, Australia. She married George MATTHEWS in 1857 at Kincraig, South Australia. George was born in Sussex, England. Together they raised a family of eleven children in Victoria, Australia. Caroline died in 1903.

They had the following children:

On 25 August 1831 Jean married for a second time to Sophia LANGLOIS. The couple were married at Sophia's home parish of St Sampson, Guernsey.
She was born 18 Novemebr 1794, a daughter of James Langlois and Rachel LE HURAY.

Jean and Sophia had the following children:

Thomas FLIGHT was born 24 June 1772 in St Peter Port, Guernsey. He married Jeanne LETOCQ on 3 May 1794 at the Town Church in St Peter Port. This couple had the following children: 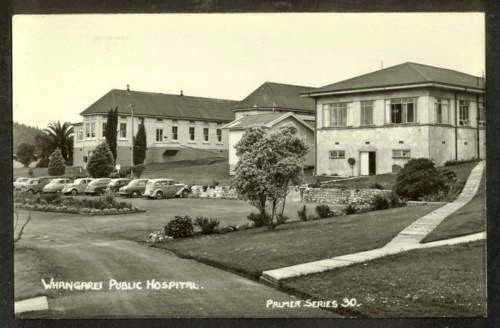 In the late 1880’s Whangarei had no general hospital. The district had a sparse and widespread population.

People were unwilling to seek medical attention for illness because if they needed hospital care they would be sent to Auckland. Travelling times and rough conditions could prove fatal- taking people away from their family and homes. Sending patients away was expensive for the local council too. They were billed the full cost of transport and care for ailing residents - £800 in 1899.

A cottage home for aged poor people opened in February 1900. Almost immediately there was talk of extending the cottage to make a hospital ward.
About this time the Auckland based architect Edward Bartley was in Whangarei, consulting with a client over a commercial building design for Bank St. He had considerable experience in the design of medical facilities, as he was architect to the Auckland District Hospital and Charitable Aid board.

Mr Bartley met the local MP Mr Thompson and inspected the Old People’s Home. He advised that an add-on there was not a satisfactory solution in the long term.
Urging the MP to approach the Government for funding, Bartley offered to design a suitable complex free of charge. He suggested a nurses’ home and boiler house be included in their plans.
The need was so urgent that he also offered to supervise the construction for free and donate to the subscription fund immediately.
This generosity and enthusiasm galvanised the district into action.

A ladies committee took charge of fund raising. Council applied for- and eventually got- a Government subsidy of thirty shillings for every pound raised toward the project, up to a £1000 limit. Mr Keyte put in the successful tender for the construction and building got underway.

When the complex opened in April 1901, the Government Inspector of Hospitals, Dr McGregor, was quoted in The Northern Advocate, calling it “the best hospital, considering the cost, in New Zealand.”

The Hospital was originally designed for a population of 10,000 people. At the time it was proposed, critics said it was a white elephant that would take 10 years to fill. In fact, it was an asset right from the start, saving lives across the region.

Edward Bartley was at the peak of his career in the late 1890’s and into the first decade of the Twentieth century.

In early 1899 he came to Whangarei where he was engaged for Mr Bentley, whose premises had been one of several destroyed in a catastrophic fire.

Edward Bartley was experienced as an insurance assessor as well as an architect. Both the land owner, Mr Mann and Mr Bentley were fully insured. A full clearance was ordered and a new design drawn up for the site in Bank St, next to the BNZ building. In discussion with his client, another fire resistant brick building was decided upon.

Tenders were called within days of the fire.

There was keen interest from both Auckland and Northland builders. Building began promptly in March of that year.

Bentley was a pharmacist and stationer. The two storey building which opened in September 1899 showed a sophisticated frontage to Bank St. The detailing in Portland cement and plate glass windows were complemented by interior fittings which reflected Bartley’s long experience in designing for retail pharmacies in Queen St, Auckland.

Designing in the Classical idiom for which he was well known, Bartley placed three arches above the verandah line, with fluted columns delineating the outer edges of the facade.

Premises were let to a dental practice on the upper floor, which were reached by a separate entrance and ornamented stairway from Bank St. Additional space on the ground floor was occupied by medical practitioners, accessed through the pharmacy.

Another posting for FLIGHT family researchers - going backwards this time, looking at the forebears of Thomas Flight born 1735. At this stage we have only raw data on these families. Any contribution which could add colour and depth to their stories would be most welcome.
Hampshire Archives are at http://www3.hants.gov.uk/archives.htm

Thomas FLIGHT, husband of Anne ROBERT was a son of Henry Flight (born 13 Dec 1708) and Jane. Both his parents were from Fawley, in Hampshire, England. At this stage it is uncertain how many of his extended family visited or resided in the Channel Islands.

The paternal grandfather of Thomas Flight  was William Flight. The name of his wife is unknown. We know of four of William's children, all born at Fawley:
Mary - born 16 March 1678
Henry - born about 1680
William - born 24 November 1681, married Alice about 1700 in Hampshire and had a family of six children
John - born 2 January 1687
Posted by Unknown at 07:29

Moore and Flight families of Guernsey

One of the functions of this Archive is to connect family members across time and space.
Tim, a Newfoundland researcher has expressed interest in the connection between the FLIGHT and MOORE families. In particular he is tracing the link between James Flight of Newfoundland ( b abt 1760) and the Channel Islands.

The bulk of our information on these families has been contributed by VINCOMBE and MISKIN descendants in the USA and Australasia. If anyone is able to add depth to our knowledge of these families please feel free to comment, or to email the archivist directly.

We can positively affirm then, Moores had settled at St Peter Port by 1796.
Elisabeth Flight, daughter of Thomas Flight and Anne ROBERT was born 9 June 1767 at St Peter Port. She married Stephen Moore 28 Jan 1797 at the Town Church there. They had four children: