Each Southern Hemisphere Spring Auckland New Zealand holds a heritage festival. Recognition of our built heritage is an important part of the event.


Bartley Family Archive holds a strong collection for those interested in colonial architecture. Here we share some of those images as our contribution to the Heritage Festival 2013.

All of the buildings illustrated below are associated with Edward BARTLEY (1839-1919).
Edward was born in St Helier, Jersey and emigrated to New Zealand as part of the family group led by his eldest brother Robert BARTLEY.

During his long career Edward served as architect to the Anglican Church, the Auckland Savings Bank and to the Auckland Hospital Board. By the time he was asked to supervise the construction of St Matthew’s in the City in 1901 he had already designed more than twenty churches for various denominations.

To Aucklanders his most familiar designs are the Jewish Synagogue in Princes st, St John’s Ponsonby, ASB building Queen St and the Blind Institute building in Parnell. All of these surviving buildings are designated Category One by the New Zealand Historic Places Trust.

The geographical spread of his designs extends from Whangarei to Cambridge. He also fostered the next generation of notable New Zealand architects – both Gerard Jones and M.K.Draffin were articled to him.

In addition, his early involvement with the Eight Hour Movement, industrial and technical education, the Society of Arts, the Museum Institute and the Devonport Borough Council are just some of his contributions to the growth and development of the Auckland region. 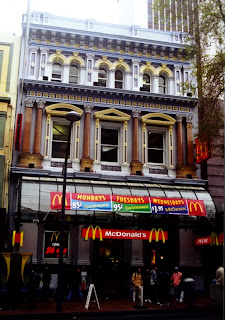