Jane Bartley was the second child of Robert BARTLEY and Betsy BENEST. She was born 25 March 1823 and baptised at the St Helier Parish Church on 6 April of that year. Both she and her elder sister Harriet married around the same time, to men who were in business together as drapers – William Vonberg and Charles Hamon. There is also a connection to Wesleyan Methodism here in that both William and Charles were active in church affairs at the same time as Robert Bartley.

Charles Hamon was born in October 1821. His parents were Charles Hamon and Susanna HUBERT. Together  Jane and Charles raised a large family and built the drapery business into a very successful enterprise. The business was retained in the family until its closure in 1996.

There were thirteen children in the Hamon family.They lived first at Devonshire Place, St Helier,later moving to a large house called Dulce Dominum at 61 Colomberie. This house is now the Norfolk Hotel.

After Jane’s death in 1882 Charles Hamon remarried,  to Mary Ann EDDY. The eldest daughter of William Eddy and Mary HALL, Mary Ann was born in St Helier in 1833. She worked as an assistant in the drapery and had been godmother to Earnest QUEREE, Jane's nephew in 1865. She also  predeceased Charles, dying on 23 April 1899.
Charles died in 1901 and his son Charles William took over the business.

Jane is buried in the Hamon family plot, in the Methodist section of the Almorah Cemetery, Jersey.

Jane’s youngest son Martin came to New Zealand about the same time as his cousin Earnest Queree, possibly in 1881. He settled in Auckland, near his extended family.

By 1883 he was employed as a clerk with the New Zealand Graphic. He later worked in the advertising department of The Star. Martin also was a talented artist.

Martin married Emily FISHER. She was born in 1868 in Auckland, a sister to his cousin Clement Bartley’s wife.


Emily and Martin had two children: Martin Charles and Emily Avis.
Martin died suddenly of an influenza type illness on 20 September 1900. He was 36 years old.


In July 1901 Emily died as a result of her struggle with Bright’s disease. In those days sufferers of kidney complaints like this lived as dependent invalids and she had not been well since the birth of her daughter. Their children were put into foster care. 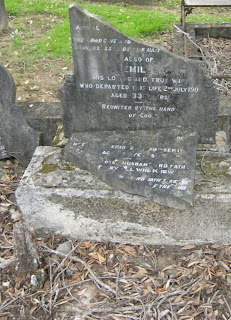