Concrete was a fairly revolutionary medium for domestic construction in Auckland during the 1870s, as timber was both plentiful and traditional in the North.

There is no doubt that Edward Bartley followed the development of concrete technology with interest.

The Paris Exhibition in 1870 had featured displays of form work for this type of construction. In New Zealand, meanwhile, Josiah Firth had extended his Auckland home Clifton in 1871 with a flamboyant concrete tower.

A few years later, in 1874, Philip Herepath had designed the Church of St James, Beresford St, using monolithic concrete. Not far away on Richmond Hill, the Warnock family had erected solid concrete buildings for both dwellings and commercial buildings.

About this time there was news from the Channel Islands of the completion in 1873 of the world’s first concrete lighthouse at La Corbiere, Jersey.In July 1879 Edward designed a concrete villa on the Great North Road, Grey Lynn.

By 1880 Wilson & Co. were actively promoting domestic dwellings constructed from their hydraulic lime cement produced at Mahurangi, and Edward had already supervised the construction of three of them.
An Extract from the Auckland Weekly News April 1881[i]

J Wilson and Co, being the sole agents for this lime desire to call the attention of engineers, architects, builders, and the public to its many valuable properties, not only as an ordinary mortar, but as a substitute for Portland cement. 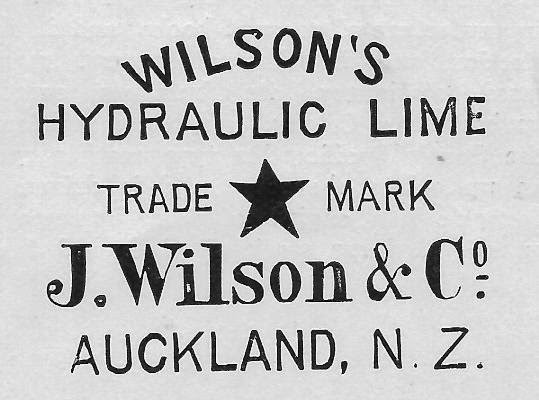 Amongst testimonials from J C Firth, Charles Stitchbury, Edwin Hesketh and others was this one from Edward Bartley:
Queen St, Auckland, October 18th, 1880
Messrs. Wilson and Co, Mahurangi Hydraulic Lime Merchants:
Gentlemen – I have much pleasure in stating that the three concrete houses you have erected with your hydraulic ground lime under my supervision, have fully come up to my expectations, that they are now without either flaw or crack of any kind and I consider them quite  equal to the cement buildings I have seen in Auckland. For cisterns I have proved it to be both cheap, substantial and perfectly water tight. For building purposes, and especially for stone work, I consider your lime unequalled, particularly in damp situations...The plastering on walls, chimneys etc done with your lime about twelve months ago is now nearly as hard as Portland cement, and with this advantage, its natural colour is the colour of bath stone...