Edward Bartley and Elizabeth Hannken in 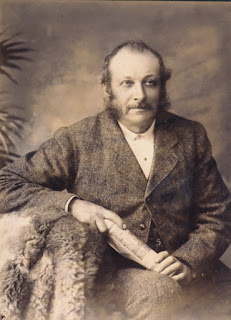 Edward was born on the 23rd of February 1839 and baptised at St Helier on the 17th of March.
He was the tenth child of Robert BARTLEY and Betsy BENEST.
At the time of the 1851 census Edward was a student living at home, aged 12. From about the age of 13 he worked in the building trade with his Father and his eldest  brother Robert. He left Jersey at the age of 15, travelling as part of the family of Robert and Esther Bartley.

Once in New Zealand, Edward worked first as a builder’s labourer and later with contractor Mr E.I.Matthews. In February 1859 he married Elizabeth HANNKEN. She was a daughter of the  German settler Frederick Hannken and his wife Eliza OTTO (nee NICOLLE). The young couple lived first in Union Street Auckland, on part of the Hannken property. They later moved to the The Strand, North Shore at Devonport.

In the 1870’s Edward gradually shifted from building and cabinetmaking into architecture.
During his long career Edward served as architect to the Anglican Church, the Auckland Savings Bank and the Auckland Hospital & Charitable Aid Board. By the time he was asked to supervise the construction of Saint Matthew's in the City in 1901, he had already designed more than 20 churches for various denominations. Today, his most familiar designs are his Jewish Synagogue, Princes Street; Saint John's, Ponsonby; ASB, Queen Street; and the Blind Institute Building in Parnell. All of these surviving buildings are designated Category One by the New Zealand Historic Places Trust.


Edward’s wife Elizabeth was born in Sydney, Australia in October 1838 and came to New

Zealand in 1840 with her mother. The family settled first in the Coromandel, later moving to Auckland. She probably met Edward through the Auckland Choral Society. They were both amongst the foundation members in 1856.
Elizabeth died in December 1921 and was buried with Edward, and their sons Claude and Percy,  at the O’Neill’s Point Cemetery, North Shore. 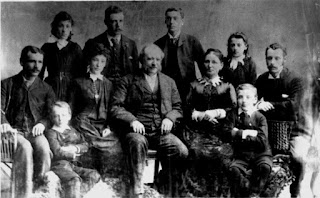 For those interested in more detail on Edward's career, his biography has been published:
M.W.Bartley, Colonial Architect, The Career of Edward Bartley 1839 - 1919, Wellington, 2006 ISBN 1877391727.
It is now out of print but we do intend to post excerpts on this blog in the future. If you are researching or have a particular building you are interested in please do email or post a comment to let us know how we can help you.