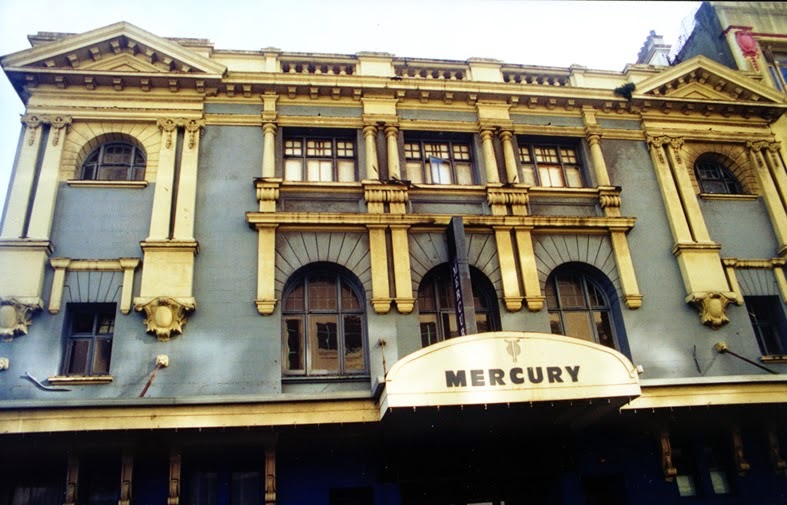 Leisure industries thrive in boom years. In the early 1900's John Fuller, a Devonport resident, was enjoying great success in the entertainment business.
With his sons, Fuller had taken over Abbott's Opera House and brought several touring companies to Auckland. He then expanded into moving pictures- the entertainment phenomena of the century..
In 1910 he engaged Edward Bartley to design a small theatre for both live performances and cinema. The site was a sloping one in Pitt St, one block back from Karangahape Rd.

One of the architect's primary concerns was fire safety, as it had been in his theatre for Abbott's Opera House.
New technology and materials were now available to combat fire.
Asbestos slates were used as wall lining and the stage was backed by an asbestos curtain. The stairways were ferro-concrete and all fire escape exits lead out to ground level, a safety feature made possible by the sloping site. The theatre was designed for a capacity of 1800 people.

The builder, W. Hutchinson placed a successful tender for erection of the building of just under £8,000, which was exceeded somewhat by final completion (refer Auckland Star 23 feb 1910 p2 col 4.)

Opening night at the Kings Theatre, on 28 November 1910, was a feast of the latest movie entertainment but it was as a home for small theatrical companies that the venue was later best known as the Mercury.

The theatre is a listed building, Historic Places Trust Category 2

The theatre is reputedly haunted: http://www.nzherald.co.nz/property/news/article.cfm?c_id=8&objectid=10610104
On the Norman Ng building and the former theatre entrance see :http://timespanner.blogspot.co.nz/2011/01/old-cinema-sign-re-emerges-in-kroad.html
Posted by Unknown at 07:34

Edward Bartley was a strong advocate for public libraries. Universal and free access to means of self improvement  formed a corner stone of his social philosophy.
In 1878 he had helped to establish the first public library in the Auckland province, at Devonport.

Auckland City Council set aside funds for the first branch library in 1911. An architectural design competition was advertised, closing in February 1912.
The site available was next to the upper Symonds St reservoir.
Edward Bartley's proposal was chosen. The concept proposed a single storey building with an 85 foot frontage to Mt Eden Road, costing less than the amount voted by rate payers.


The design featured an ornate portico supported on six ferro-concrete columns of the Roman Ionic order, covering broad entrance steps. The two bays either side of the entrance were defined by projecting pillars.The floor plan included lecture hall, committee room, reading room and library facilities for up to 10,000 volumes.
Lighting was by electricity. Acoustics and fire safety were especially considered in the plastered cement and brick construction.
Librarians office and counter was positioned between the two rooms with a clear view of the entrance as well. The inner hall was provided with an ornamental tiled floor and rimu panelled dado.
The windows were a notable design feature. Each are supported by four concrete mullions 6 feet in height, designed to reference the entrance columns. At the time they were the largest single mould concrete products made in Auckland.

Edward was well over 70 years old at the time of opening in March 1913.
Confident in adapting his style to modern taste, he was keen to push the known boundaries for new technologies when given the opportunity.

The 1882 construction of St John's was a huge undertaking for the Wesleyan Methodist community. The architect’s fees alone amounted to more than £2000.
Six months were allowed for the construction, which included moving the existing building further back, to be used as a school.
The new church was constructed on concrete foundations. The exterior is a feast of tracery and finials, tower and spire, on a well balanced design.
The tower, at the north east corner, stands 50 feet high and is surmounted by a spire of 62 feet in height. It pays homage to the spire of Salisbury Cathedral, England in line and proportion. Weather put it to the test before the church was opened, and before the iron cladding was attached. Auckland experienced a week of gale force winds in mid- March 1882 and progress was delayed. The task of lifting the Maltese cross into position at the top of the spire was postponed until the 20 March and the arrival of calmer weather.[i]
The interior of St John’s has been altered more than once over the years.
The original design displayed a sense of drama and a high degree of attention to aesthetics in the finishing details. The hammer beam roof was filled in with tracery. At the back of the rostrum was a Gothic screen – a reredos- composed of three painted arches filled with tracery, standing 22 feet high. The front of the rostrum was also of Gothic arches with turned columns. The ornamental communion rail repeated the use of turned rails to complete the effect. Practical matters were not overlooked.
Acoustics and light levels were accounted for in the design itself but additional devices for climatic control were incorporated into the design in such a way as to be indiscernible to the eye.  The tower was constructed so as to provide ventilation for the church. A ventilation mechanism was built into the trefoil decoration of the cornice, which could be controlled by the doorkeeper, a solution Edward had first employed in his design for Holy Trinity, Devonport.
The result was a striking building which functions well on a practical level at the same time as it calls attention to traditions of worship across time and space.

An April Fool's Day stunt was played out on the site in 1882 - this eloquent report gives a clue to Edward's sense of humour.

The building Aucklanders now know as the Blackett's building was once the original offices of South British Insurance. The company was a New Zealand firm founded in 1872 by a group of influential colonists. Their business was principally fire and marine insurance.

This corner of Queen and Shortland St housed the company until the late 1920's, when an adjacent site was taken for the construction of state of the art offices on the corner of Shortland St and High St.

Richard Keals designed the first offices for erection in 1879. The Italianate design was complemented by a statue of Britannia on the roof line which became an Auckland land mark.
Just before the World War Edward Bartley's firm was asked to take charge of alterations and modernising.
A third storey was added and the footprint widened to take in the frontage previously part of Woolam's pharmaceuticals.

The entranceway was improved and enhanced by a grand stairway, with modern lifts for the use of the public.


The 1929 headquarters was designed by Grierson, Aimer & Draffin. M Keith Draffin had worked with Edward Bartley up until the latter's death in 1919. The design is a feast of deco detail in the Chicago style