Today we continue with our Irish theme by introducing the Slattery connection.

Matthew Slattery was born in 1824 in the village of Golden, about eight miles east of Tipperary Town on the River Suir and about 4 miles from Cashel in the other direction. His parents were Eliza Champion and Robert Slattery.

When Matthew was 14 Ireland experienced a tremendous storm which is still known today as the Night of the Big Wind. The heavy snow which fell on that night of the 5th January completely melted in freakishly warm conditions the following day. Those spared the loss of their homes in the hurricane strength winds still faced the sodden soil and loss of livestock, setting up lean times for the year ahead. Across Ireland there were 300 casualties on the night of the storm with many thousands left homeless.

A month later Matthew was in Cashel enlisting with the British Army. His family received the bounty of £2-1 allocated to his regimental number 1049. The salary for a boy at this period was 11 pence, £1-1 for a man. He was recruited in to the 58th Regiment of Foot, the Rutlandshire, also known as the Black Cuffs because of their distinctive uniform.

After a short spell in Britain the 58th was sent to New South Wales, Australia. Their route south went via Tasmania and Norfolk Island accompanying convicts being transported to the penal colonies there. Matthew was in one of the 19 detachments under Lieutenant Colonel Wynyard which departed between 1842 and 1843. They remained stationed in New South Wales on garrison duty until unrest in northern New Zealand saw them transferred to Auckland in 1845.

Matthew was 21 years of age, a solid stocky young man about 5’ in height (a slight increase on his 4’10” at enlistment) when he arrived on the North Star on 22 March 1845. It was straight into action from there. His military records list him as present as Pomare’s Pah on April 30, 1845. Battles followed at Heki’s Pah, Waikiri and Kawiti’s Pah before the capture of Ruapekapeka on 11 January 1846.


Once the immediate danger of battle passed, attention turned to domestic matters. A young lady by the name of Mary Anne Pickford also travelled to Auckland on the North Star in 1845. Originally from the village of Shepton Mallet in Somerset she was a daughter of Anne Dexter and Samuel Pickford. Mary Anne married Matthew at St Patrick’s in Auckland on 3 June 1846


A promotion to Corporal on 1 December 1847 was followed by the new rank of Colour Sergeant in 1848. Matthew remained with the 58th on garrison duty at Auckland until their departure for England in 1858.

Several hundred men took discharge in New Zealand at that time but Matthew was only 34 and newly promoted to Quarter Master in July 1858.

His growing family travelled with him to Parkhurst on the Isle of Wight, where he served until 1862 as Quartermaster 5th Depot

I had a request recently for more images of some of the Irish connections of the Bartley families. Today we focus on Patrick Tobin who settled in Wellington, New Zealand.

Patrick was the third of eight children born to Maurice Tobin and Bridget O'Donnell of Michelston, Cork, Eire. The Tobin farm at Curaghavoe is still held in the family, despite the history of conflict and famine in the region during the nineteenth century. The imposed laws of inheritance, along with economic distress, led to an ongoing dispersal of Irish people around the world. Within that framework, the Tobin's tenure and connection to their place of origin remained resilient. Many of Patrick's wider family group did not fare so well.

His paternal grandparents were Maurice Tobin and Ellen McGrath. His mother's parents were Patrick O'Donnell and Ellen Connell. The O'Donnell's were farmers from Lyreen, Cork. His O'Donnell uncles immigrated to New Zealand in the 1880's and facilitated their nephew's settlement later on.
Their only sister, Bridget married Maurice Tobin at Kilworth, Fermoy on 5 February 1893. She was 22 years old. This photo of Bridget with her mother Ellen Connell was most likely taken to mark that occasion. 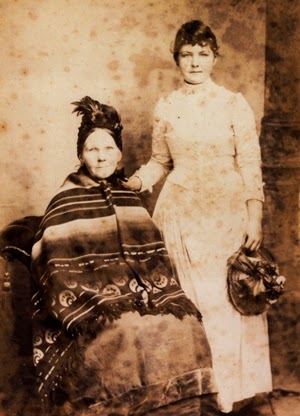 
Maurice settled in Auckland, New Zealand and married late in life. He died there in 1967 and was interred at Mangere cemetery with his wife Della.

John meanwhile had joined cousins in New York, a culture which he relished. He returned to Cork in 1926, when their father Maurice died aged 60.


Catherine, also known as Kate or Kathleen, also went to the United States.


Patrick, after his journey to Wellington, joined his O'Donnell cousins at their market gardens north of the city. Trained as a radio operator he found clerical work in Wellington more in demand. During the 1930's he worked in the head office of J R McKenzie's department stores.


Patrick met Annie Coyne from Makahu, Taranaki and married in Wellington on 25 June 1927. Patrick and Annie had four daughters - Eileen, who joined the Sisters of St Joseph; Patricia, who married Harold Bartley and settled in Auckland; Margaret, who died young; and Kathleen, who married Murray Elliott and settled in Darwin, Australia.