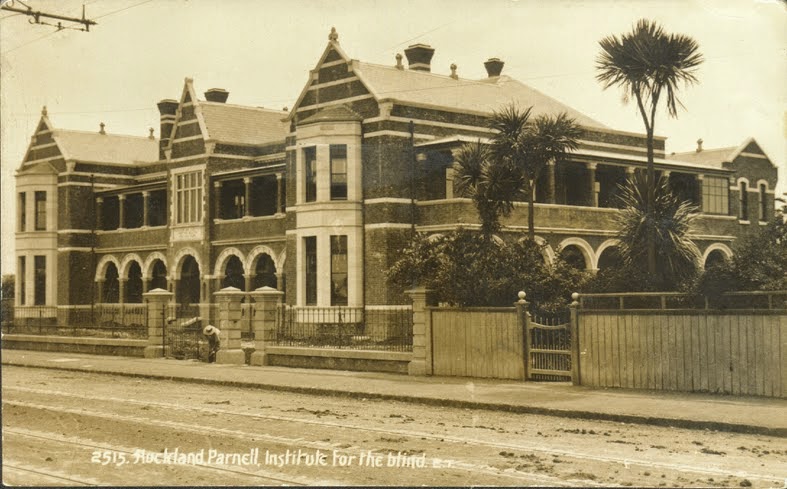 In 1909 Edward Bartley was aged 70. He was at last enjoying a particularly buoyant economic climate for architects. Not since the early 1880's had Auckland seen such a level of public works and new construction in the commercial area of the city. This reflected a more general confidence in the economy as a whole and Aucklanders enjoyed a higher standard of living in 1908- 1914 than they were to achieve for quite some time afterwards.

The brick building Edward designed for the Royal Institute for the Blind in Parnell is familiar in Auckland. Less well known is the fact that Edward's relationship with the Institute, both personally and professionally, preceded that building by many years.
In 1890 the Jubilee celebrations in Auckland had been completed with a surplus of  £155. It was suggested that this surplus should be used to establish an Institute for the Blind.
The object of the proposed institution was to provide basic education and instruction in a craft or skill to enable the blind to earn their own living. The example of the Liverpool Blind Asylum was held up as a model. In 1891 the Institute moved to property at the Parnell end of Manukau Rd which was altered to suit.
Additional ground beside the school was purchased. This allowed the executive to agree to construct a school room, gymnasium, male dormitory and new sanitary areas for the rapidly growing student body now in residence.
Edward prepared plans for these additions.  The gymnasium and the larger workshop were deferred for the time being but the decision was made to proceed with the other new buildings, along with the suggested fire precautions and improved water supply.
The additions were opened in August 1892 and featured wide verandahs on the whole of the north side of each block. The boys’ dormitory was considered  generous - a room 32 x 55 feett was divided internally into four rooms, each with four beds.
About this time the Institute Executive was attacked via Letters to the Editor accusing the gentlemen concerned of self  promotion and cynical charitable gesturing.
Edward felt strongly enough to reply swiftly in an angry defence of the organisation and the aims of the Institute:
By 1898 the school had outgrown the existing buildings. Fire safety was still a major concern. The Auckland members of the Legislative Council were canvassed to approach the Premier for £5000 to erect the main block required. While this lobbying was under way the inevitable happened.
On 7 October 1898 fire broke out at the Blind Institute. Starting in the outbuildings the fire was contained before it reached the main block, mainly due to the availability of town supply water at key points on the premises. Edward’s first designs for a two storey brick building date from this time.
It was not until 1905 that plans for a masonry building could be realised. A Government subsidy of £2500, along with a further bequest, enabled Edward's design to be accepted. The foundation stone was laid in 1907. The building was opened in May 1909.
Construction was of brick, primarily as a fire precaution, but also because the material suited the style the Institute required. The building featured a number of technical innovations. Most notable was the first floor construction, where steel and concrete slab were used, with a more traditional tongue & groove timber top surface. A verandah surrounded both floors on all sides and the verandah doors incorporated another new device whereby the doors were hung on the inside but opened to the outside, allowing full use of all the verandah space without obstruction in the doorway.
Inside the concrete stairways were adorned with very decorative cast iron railings. These balustrades were much admired at the time of the opening in 1909, and continue to be regarded as fine examples of the use of this type of decorative work.

I was interested to see the angle taken in recent media coverage of horses on Ruakaka Beach.
http://tvnz.co.nz/national-news/ruakaka-residents-want-horses-off-beaches-6044610.
No account was taken there of the district’s long association with equine sports. Nor was any mention made of the great fondness which the majority of residents have for their neighbouring stables and racetrack.
It may interest readers to know how long horses have enjoyed the use of Ruakaka beach.
Historically Ruakaka has been synonymous with racing as this report from 1875 shows.

There was heritage news of interest to Bartley/Hannken descendants this week. The former Graham and Co building at 104-106 Queen St, Auckland has been given a Category 1 rating.

Frederick HANNKEN father of Edward Bartley’s wife Elizabeth owned a drapery store in this part of Queen St from 1850. Although the Hannken’s premises predates the Graham building and is now destroyed, this block of Queen St features strongly in family reminiscences.

Philip Hannken (1858-1940) wrote his reminiscences in 1935. He chose to take his readers on a walk around his childhood surroundings:[ii]
My parents had a drapery shop in Queen St…let us stroll up the street and see who are our neighbours. Next door is Connel and Riding’s auction rooms and above that Mrs Pollock’s butcher shop…There was also a large butchery in this block at one time – Dornwell’s…Above Dornwell’s was a small barber shop. The tonsorial artists was known as the Mt Eden barber; it was said if they were short of a good barber in Mt Eden Gaol the police would run him in and so he received the above name, which he in no way resented, but when he got his freedom he was often heard complaining of the state of the tools of his trade as he found them at his country residence….My grandmother [Eliza NICOLLE then RAMPLING] had a grocery shop just around the corner in Wyndham St.

The Hannken family had lived previously in the Coromandel, having arrived in the Bay of Islands in 1839. They were all familiar with the language, customs and requirements of their customers.

Elizabeth Hannken, later Bartley, recalled:
After a few years in Auckland Father opened a business in Queen Street on a portion of the site now occupied by the Bank of New Zealand, and as the nature of his business brought us in close touch with the Maoris, we all became good native scholars, which added greatly to the success of the business.
Father used to employ many of the soldier’s wives sewing and making gowns for the Maori women and as the soldier’s pay was very small, the women were glad of the opportunity of earning a little, although they only received sixpence per gown for their labour.[i]

Auckland’s smart retail precinct had developed along the eastern side of the town, largely due to the geographical features. Fred Hannken chose his western site with an eye to developing his existing business contacts and exploiting his former profession of tailor at the same time.
Like his mother in law around the corner in Wyndham St, Fred Hannken was able to take advantage of the close proximity to the native and settler customers coming from the wharf nearby. He also had a developing market from the new housing precincts appearing on Auckland’s western side.
The site of Graham and Co recently listed has then a much longer association with drapery and Manchester than the 1860’s.

One of the disadvantages of this part of Queen St was that it was on the ‘wrong side’ of the Ligar Canal. This was the Horutu Creek, contained by a culvert, which ran down Queen St to the harbour. By 1850 when the Hannken Drapery opened that culvert was boarded over. It was still used as a sewer and would continue to be so for many years, constituting a serious nuisance to public health.
Philip Hannken fell into that creek as a toddler, so the state of the planks covering the menace can be imagined.
At the time we speak of this lower part of Queen St was a rough and ready thoroughfare. Like most of the roads it had no seal. The quagmire in winter made both trade and travel challenging. Joe Hannken records a family recollection: a bundle of spades that was dropped in the muddy street while being unloaded from a cart outside the Hannken shop, which was not discovered until many years later when the road was being dug up for relaying.[iii]

Moving from the Hannken store in the opposite direction, the nearest neighbour was the Partington Store. This premises was owned by the same firm which owned the landmark windmill on the Auckland sky line. Philip Hannken recalled:
we children had every reason to remember that store for we were often regaled in there with a biscuit as large as a cheese plate and well covered with either currants or dark brown sugar. Next to Partington’s and on the corner of West Queen St [now Swanson St] stood Gundry’s chemist shop. Going up West Queen St we find Christopher’s grocery store, their yard forming the back boundary to our place.
The 1860s brought a vast change to the character of Auckland. The population increased significantly and became characterised by military presence. This militarisation, along with the wider regional conflicts, adversely affected the Hannken’s business interests.
In 1865 construction began on the BNZ building next door to their drapery. The bank was first erected four bays wide. Later extensions resulted in the demolishing of the wooden structures adjacent, one of which was the Hannken premises. In 1866, due in part to that construction,  the family business moved to northern Shortland St.[iv]