Today we explore a building designed by Alva Bartley, son of Clement Bartley. This is not one we can visit today. We do have some wonderful images though. Auckland Public Libraries Special Collections has digitised images from the agency Doree & Sache.

Alva Bartley and Norman Wade were in partnership from 1920 until 1935.  More information on Alva's early career is available here.
When Norman Wade set up on his own he retained the Auckland Harbour Board as a client. Alva Bartley retained the broadcasting business. This was now under the National Broadcasting Service, established in 1936. Both men continued to explore the potential of the Modern Style which was such a feature of their work together.

In 1939 Alva designed Auckland's second purpose built broadcasting building. In partnership with Norman Wade he had already completed the 1YA building in Shortland St. This brief was for a much grander affair.

The Government purchased land in Durham St, behind His Majesty's Theatre. The site was being used as a car park. It offered a street frontage of about 42 metres ( 139 ft) and a depth of 18.6 m (61 ft).

The contract price of £70, 000 was confirmed just two months into the Second World War, in November 1939.1 N Cole Ltd of Auckland secured the building contract.
Construction began in 1940. By October 1941 the building was open and operational.2 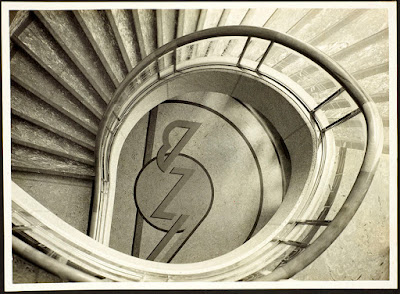 Alva had some interesting talent working with him on this project.
Imi Porsolt, a talented European emigree, was one. His contribution to New Zealand art and architecture was later profoundly influential, both as a teacher and as a practitioner. 3
Raymond Thorpe, later of Cutter Thorpe, was another. He had worked with Lippencott previously.
These men, with their associates such as Ralph Pickmere, would take a lead role in shaping art, design and architecture in post-war New Zealand.

This design has been described as New Zealand's first truly modernist building. That may be so. It must have look extremely luxurious to war-time Auckland. The style was glamorous and confident- both qualities associated with broadcasting technology. The new broadcasting theatre it contained was highly praised. Big bands played here before live audiences. It remained an important contributor to New Zealand music in many genres.
The building was removed in 1990 about the same time as its neighbour His Majesty's Theatre.


Enjoy the rest of the images - our thanks to APL 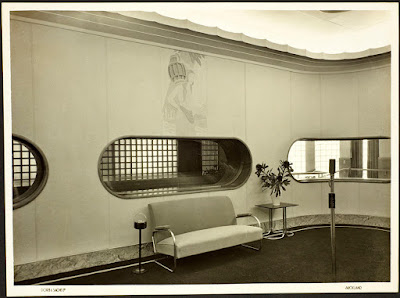