The BARTLEY families in New Zealand all have a strong connection to Devonport, North Shore, Auckland. Edward BARTLEY settled there in 1872. He moved his growing family first to a rented house on the Strand, later building his own home in Victoria Road.

Edward participated energetically in local affairs, serving first on the Flagstaff District Highway Board and, with his friend William PHILCOX on the later Devonport Roads Board. Politics was a serious matter in Devonport in the early years. It was not unknown for animosity between factions to be expressed in both physical and verbal assaults, as the parties held to their firm opinions on the future development of the district. Progressing from the Roads Board to the inaugural Devonport Borough Council, Edward somehow managed to steer a path between opposing parties, exercising diplomacy as he went.

Professionally Edward's contribution to the built environment of his home suburb was considerable. His active involvement in the arts, photography,technical education and music involved his whole family and the Devonport community as a whole.

In 1880 a fund was started to cover the costs of a larger church of Holy Trinity at Devonport. Fundraising was very much a community affair involving any number of entertainments and fetes. The eldest Bartley children were now young adults and willing musical performers. With their Hannken cousins, Edward's eldest sons formed a popular string orchestra which was much in demand.

Henry PITTS was a well known builder in Devonport. He worked with Edward on the Holy Trinity Church. Here he lists specifications for amendments to the standard contract to erect a small villa for Mr SWAINSON.

Devonport had the greatest concentration of Bartley designed family homes in Auckland, with the possible exception of Surrey Hills subdivision. Some of these are his simple "copy book" cottages and small villas for working people. These were constructed in multiples during the boom years of the 1880s.
The most basic were kauri construction with two or four rooms under a hipped roof. The simplicity was often relieved by features such as decorative mouldings at the top of verandah posts.
In the next price bracket came the single storey villa, of timber usually but also produced in concrete and brick. The interior was dissected by a passageway from front door to back. Two rooms either side of the passage provided the basic living and sleeping quarters. These homes were easily extended with the addition of a lean-to at the back as the need arose. Some sported a filigree valance on the front verandah, with decorative eaves brackets which were picked out in a light colour to enhance the shadow pattern effect.
By the 1880s the bay villa was the last word in modern housing. The basic villa was now modified by the addition of a projection forward- a bay- in one or both of the front rooms. The verandah now protected a smaller porch and the decorative potential of the street frontage was considerably enhanced by the opportunity to include decorative fretwork, bargeboards, finials, brackets and more. This elaborate ornamentation was increasinly emphasised by dark colour such as maroon or green against a lighter weatherboard colour. The verandah roof was often fashionably finished in multi-coloured stripes to match.
At the other end of the market Edward was designing large residence for professionals and the well to do, such a Judge MacDonald's home at Devonport in 1883. The Bartley home was built in 1879 on a lower storey of concrete construction and upper storey of kauri. It was sparsely decorated, as compared to the prevailing fashion, with the enclosing verandah offering the only ornamental feature on the Victoria Road frontage. On the seaward side a single bay extended two storeys, with the verandah returning to allow the best of the views from the elevated site.

The Duder brothers were long term associates of Edward Bartley. They shared a common interest, amongst others, in developing concrete technology in Auckland. The first concrete lighthouse was completed at La Corbiere, Jersey in the Channel Islands in 1873. Local pioneer lime cement was produced at Mahurangi by Wilson and Co. Edward had used their product to erect three concrete villas by 1880. Wilson's agents on the North Shore were the Duder brothers.

Some public projects for which Edward Bartley was commissioned as architect were never constructed, for various reasons.

Edward Bartley's 1902 design for Devonport Borough Council incorporating Post & Telegraph Offices, library and council offices is one such case.
At a special meeting of council in September 1902 Mayor Ewen ALISON and councillors signed and approved the design shown here. It provided for two storey brick council chambers, incorporating post office, telephone exchange and public library in a T shaped plan.
The building plans were then sent to Wellington with the condition and terms of leasing the reserve vested in the Council for the erection of public builidngs. The Council needed to move quickly to have the Government determine the rent before the final parliamentary session in October. The postal authorities also had some say in the final design of their facilities.
By July 1903 Ewen Alison was in Wellington visiting the Postmaster General and looking for a final decision. There was also local and regional opposition to the principal of a Borough Council seizing a recreational reserve for building purposes.
The plans for the civic centre were never realised, nor was the Post Office successful in its alternative plan of acquiring part of the reserve for its own use. When funding finally came for new postal facilities in Devonport it was for comparatively moderate premises in Victoria Road. 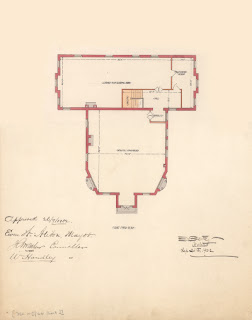 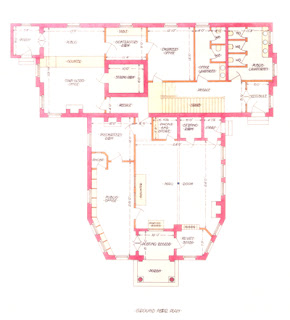 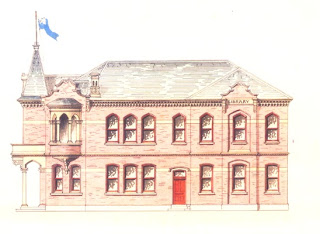 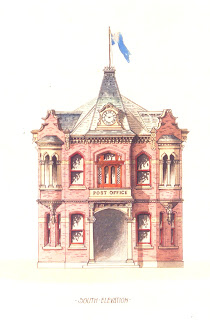 In 1913 a Stanley bay resident Mr A Lloyd brought his proposal for swimming baths before the Devonport Borough Council. The complex he proposed was designed by Edward Bartley. He offered to personally subscribe one third of the cost and suggested a public share issue to raise the balance. A site near the Esplanade was most favoured.
The idea was scuttled by the old issues of cost and site. There was no position available on the foreshore which would not interfere with the established uses of commercial and leisure craft.

The original plan for both men's and womens baths of equal size has been amended to a larger pool for men, leaving the architect with that difficult space "for Future Expansion". This reworking more accurately reflected the sensibilities of the majority of adults of the time. Sixteen private bathing cubicles were provided for each gender for those uncomfortable with communal bathing. Lloyd had visions of completing the complex in time for the Auckland Exhibition opening in December 1913.