Auckland has some lovely examples of colonial period church architecture.

St Luke's was once in farmland, some distance from the centre of Auckland. It is now all but crowded out by retail precinct and highway, but still serving as a spiritual and community hub. 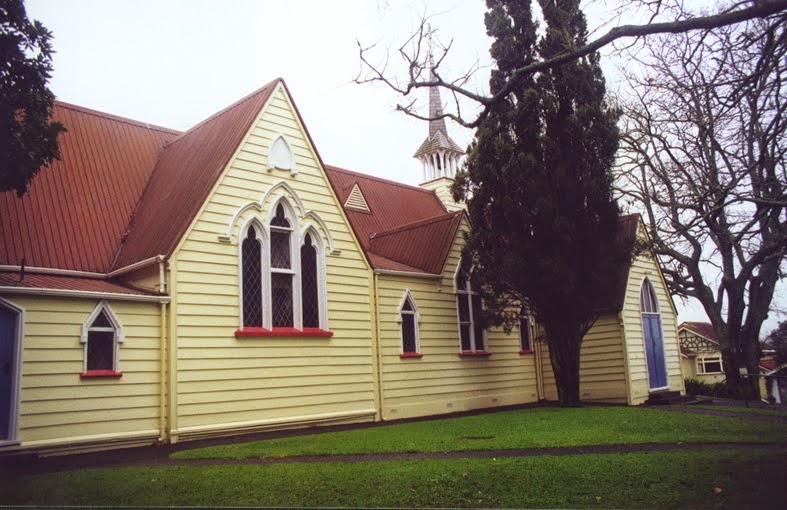 The nave and chancel of St Luke's was dedicated in 1872. The architect at that time was P. F. M Burrows. Later growth in the congregation required extensions to the existing church. The opportunity was taken to refit the interior and construct a vicarage. These additions were designed by Edward Bartley as Architect to the Anglican Diocese of Auckland.
The remodelled building and the adjacent cemetery were re-consecrated in 1883. The church itself was doubled in size.
Increased capacity was achieved by extending the nave. Transepts were added. The chancel was altered to be formed by five sides with one centre window and two side windows. A communion rail was especially designed of polished rimu on burnished brass standards.
A porch on the north side of the nave at the west end was joined by a smaller porch at the corner of the south transept and the nave. A belfry and small spire were added to the west end.
This beautiful church was lined throughout with 4" V jointed matched and dressed kauri board, giving the interior that lovely honey glow characteristic of our native timber. 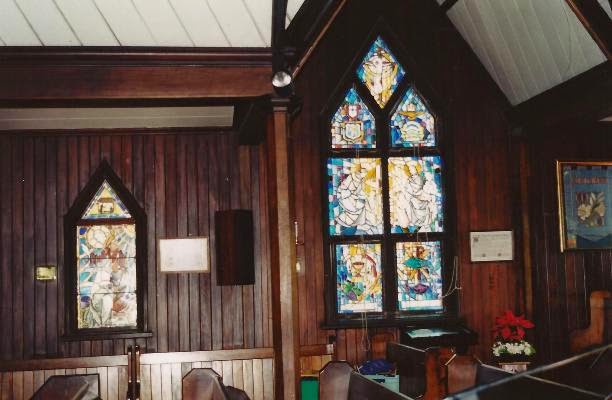 The interior is further enhanced by beautiful stained glass.
A vote of thanks to the St Luke's community for their care for the building, cemetery and grounds. 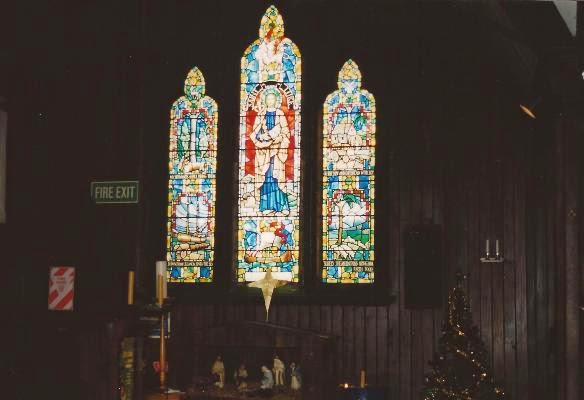 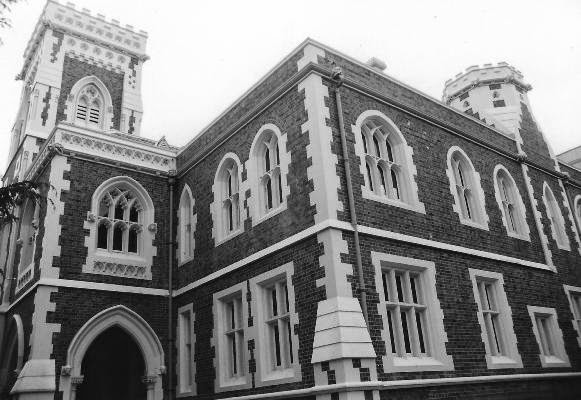 One of my favourite Auckland structures is the Supreme Court Building. It is redolent with reference and symbolism belonging to another time and place. It amuses me too. The story behind its construction is page after page of misunderstandings, acrimony, dispute, botch-up and patch up. Yet it still stands intact on the original site. Married to a 20th century sibling it still provides a venue for the legal system which, like the building, was planted here.

The designer was Edward Rumsey. He chose English Gothic design for this public building, intended for the high point of Barrack Hill. Government House was nearby, as was the army barracks and commissariat. Visually he was calling up a romanticised heritage of might and magisterial power, of the glorious past associated with medieval english social structures - crown, church and state.
I include the full news coverage of the plans here. Enjoy this optimistic exploration of the design:

Rumsey's design still 'stands forth bravely' as a beautiful addition to our city, but the road to completion and healthy usefulness was a long one. 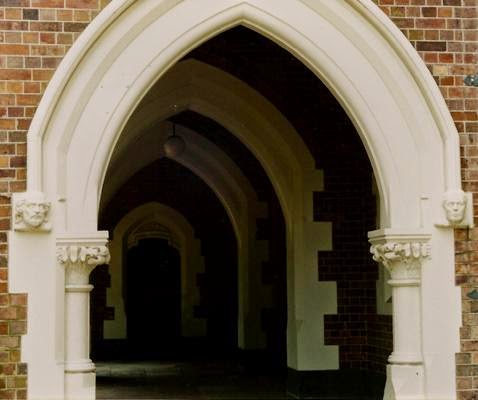 Amos and Taylor began work on the building under the Clerk of Works Angus Mckay. The foundation stone was laid on 5 November 1865. By January 1867 the roof trusses were being put in place.  Business relationships were deteriorating between government staff and McKay, as well as between government staff and the contractors. Accusations of dishonesty, overt or implied, soured working conditions even further. There were issues around payments, materials and supply. The architect was involved in some acrimonious exchanges as well.
Fresh tenders were called at this stage of the project. McKay's resignation was accepted. 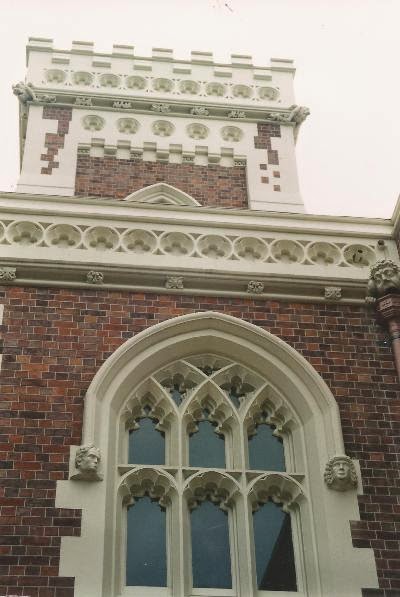 Matthews & Bartley Builders took over the construction from April 1867 to January 1868. Edmund Matthews had the experience and skill for these large, public projects. Young Edward Bartley had the energy and enthusiasm to see the construction finished.
Completion took some time to achieve.
Here is the report made early in 1871 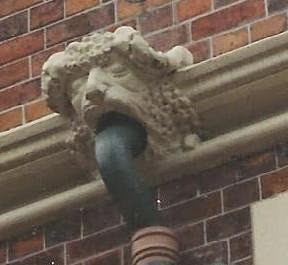 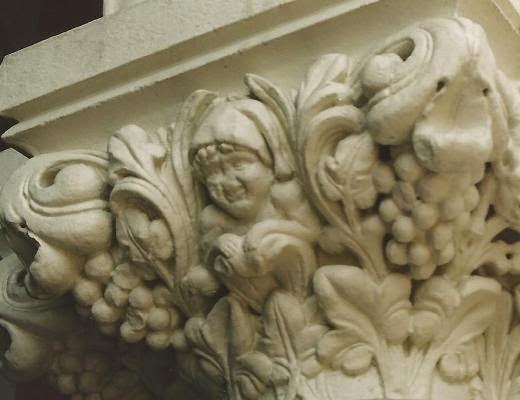 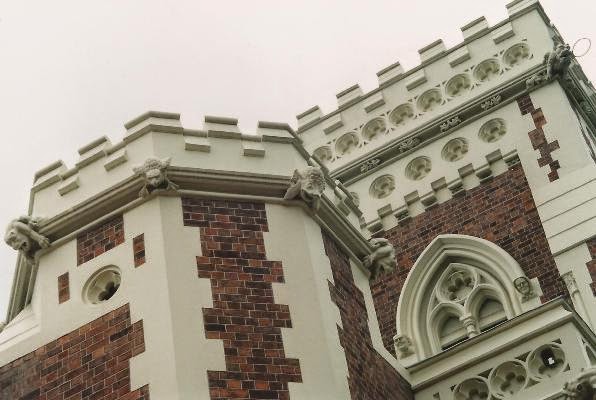 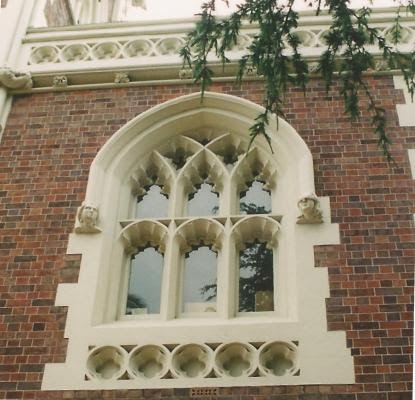 Plasterers were still working on the site in the winter of 1875. (Daily Southern Cross 2 July 1865) The acoustics and the leaks continued to be worked on for many years.
We have on file a letter describing a first hand experience of approaching this building in 1876.

'...The Supreme Court Building was a prominent feature of the high ground to the seaward side of the Barracks. The tower of the building could be seen some distance away and the contrast of white plaster detailing against red brick marked it as an unusually substantive structure in a town of predominantly weatherboard and single storey dwellings. In closer proximity realistically wrought heads of both worthies and demons peered down from the crenellated roof line....The dim entrance made a forbidding contrast after the bright February sun and heat outside .' BFA LL A.S

Yes. This listed building is one of our architectural treasures. It may be anachronistic. It may have a chequered history, but the sculptures Anton Teutenberg created, the window tracery the plasterers laboured over and the features Rumsey held as ideals in his mind are there for us all to enjoy.

The early 1880’s were years when the central area of Auckland was practically rebuilt. Despite depression biting further south, buildings for both public and private use sprang up in Auckland’s great expression of confidence. Companies listed at a phenomenal rate at this time. Both established businesses and new ventures were making the most of the limited liability status now available under new statutes. Improved road and transport systems, along with ready lines of credit, fostered land speculation and the rapid growth of suburban areas.


It was these few years that established Edward Bartley's practice. It was also a time of unprecedented building for many religious denominations.After his competition entry for St Sepulchre’s was placed third, Edward completed a successful design for St David’s Presbyterian Church in Symond’s St in 1879.

The site was a commanding one, situated on the highest part of Symonds St, on the same level as the Khyber Pass reservoir. The main building was 71 feet long and 37 ½ feet wide. A 44 foot high tower extended beyond the main building, facing the street. This was finished with an octagonal spire and wrought iron finial standing a further 47 feet high.

For the plain roof interior Edward specified a contrast of totara brackets and kauri principals resting on carved trusses, all to be varnished, with the boarding of the roof picked out in white paint.

The rostrum continued the Gothic theme in the panelling of native timbers below turned balusters, with Gothic arches between.

The main entrance was from the tower. The side and back of the building were of weatherboard, with the front and tower in rusticated board.

In 1902 the church was moved from Symond's St into Khyber Pass, a huge undertaking for the time.


It was replaced in 1927 by a new St David's. The future of that building is now also bleak. Colloquially known as the Presbyterian cathedral, it closed in 2014.

Edward Bartley is often described as the first Architect to the Auckland Savings Bank. This honour rightly belongs to Frederick Jones, the successful competitor for the design of the first ASB building in Queen St, or to Reader Wood who took over as architect for that project in 1860.
Edward's association with Auckland Savings Bank was, however, a long lived association which also began with an architectural competition.
Today we look at the Bank's 'flagship' building on Queen St, Auckland, completed in 1882.

In 1881 the Bank invited architects to enter designs for a new building to be erected on their Queen St site. Edward and six others entered anonymous designs in the competition. The Trustees were reported to be practically unanimous in their preference for Utile Dulci – the Bartley design.[i]Building was scheduled to get underway by the end of 1881 to erect the three-storey building.

The style of the architecture was described at the time as light Italian. Today Italianate Victorian would be more apt.
The front elevation was to be adorned with four panels on the lower storey – two each for the Horns of Plenty and one each for the figures of Commerce and Manufacture.
The base of the front elevation, four feet in height, was originally to be of blue stone surmounted by a polished Aberdeen granite string- course of Greek pattern and the remainder of the front in Hobart stone.
The decision was finally made to use Oamaru stone, which was the cheapest proven stone available, with imported material for the columns.
The entrance was designed to be imposing. The main doors, flanked by windows, led into  a vestibule nine by fourteen feet. The flooring for this area and the public space was in decorated in Minton encaustic tile. 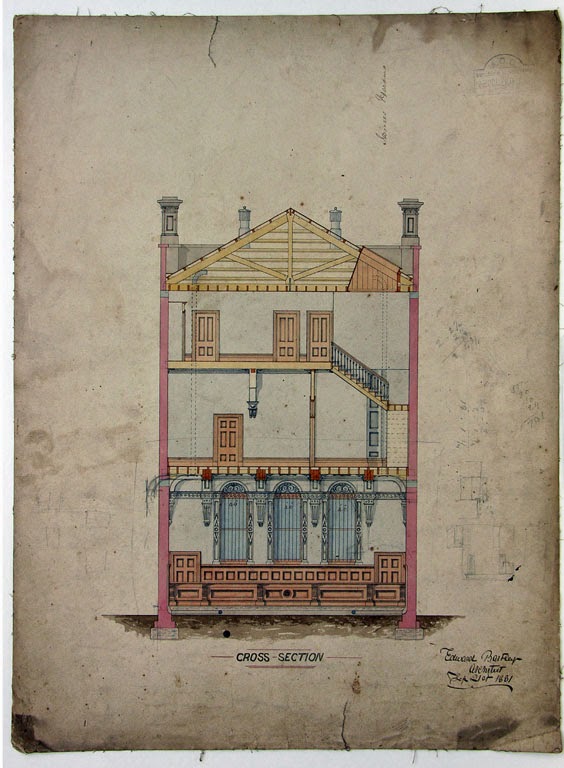 A massive staircase to the first floor rose from the left-hand side, with the manager’s room dominating on the right.
The vestibule was divided from the banking offices by double action swing doors with Corinthian columns, frieze and entablature.
The banking counter was twenty-nine feet long with all the interior fittings of polished cedar. Upstairs was the accommodation for the manager, in the form of a four- bedroom apartment, as was traditional at this time.
Access to the service areas on the first floor was level with Lorne St at the rear.
Ventilation for the whole building was provided by means of perforations in the cornice of the banking room, the air being carried by tubes to the roof extractor fan.
The building still stands, at 260 Queen St, being used as a bank until 1968.
Listed Category 1 with NZ Historic Places Trust, it is well worth a visit, as some original features remain intact.
See http://ascarchitects.co.nz/projects/interiors/mcdonalds-260-queen-street for images of recent upgrade to facilities and preservation work.