Today we look at the sixth child of Robert Bartley & Betsy Benest- Eliza Bartley. Much of this is fairly recent research so I have included what is known so far about her children and grandchildren. 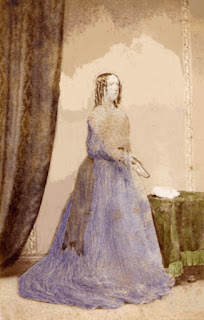 Eliza was born in 1830 and baptised at the Town Church St Helier on the 12th of March 1830. She married Charles HAWLEY about 1847 at St Helier. Although this marriage has not yet been found, we do have a record of the baptism of their first child Eliza at St Helier. Eliza Hawley was born 23 August 1847.
Sometime between 1848 and 1851 the Hawley family left the Channel Islands. In 1853 they are found settled on the Victorian goldfields where their son Henry Charles was born in that year. Charles (1854-55) Edward (1855) and Matilda (1857) followed. Amelia Virginia was born at Port Sorrell Tasmania in 1860, perhaps while travelling, as the family continued to live at Cherton, Forest Creek, Castlemaine and farmed there.


Charles Hawley died in Victoria in 1862. Eliza remarried, to Robert WAITE in 1870. They had a daughter Mary Ann. Robert Waite died 7 January 1883 at Faraday.  Eliza married for a third time to Joseph WATERWORTH.
On 21 February 1889 Eliza died on the family property at Guildford. In her will she appointed her son Edward guardian of Mary Ann and left provision for the expenses of her care until her marriage. Edward had married Elizabeth TEAGUE in 1878, the same year that his sister Matilda had married Joseph BEAVER. Joseph Waterworth died 4 November 1892.

In 1829 John TUCKEY senior signed an agreement to be part of Thomas PEEL’s plans for a settlement on the Swan River in Western Australia. John was an indentured servant to Thomas Peel. He was a widower and travelled with his son James and his daughter Charlotte.
He arrived near Freemantle in May 1830 on the Rockingham which had been hired and set sail in January 1830. They were hit by a storm while disembarking and although there were no casualties most of their property was lost. Unlike many others John Tuckey travelled on with Peel to Mandurah.
John was given a property to farm and settled in 1831 about two miles north of the Murray River. He applied to leave Peel’s service in 1833 and then took up 50 acres of Peel’s land grant. By 1836 he was one of four European men in the Mandurah district, one of whom was T EACOTT who married John’s daughter Charlotte in 1839. His son James married Mary Anne Esther (her surname is not yet known). This couple would have four children – John Jnr, Charles, Matilda and Helen.
In 1852 John Tuckey sold twenty acres of land and left for Victoria with his family. He returned to Mandurah in 1859.

John TUCKEY Junior married Eliza HAWLEY in 1864 in Victoria. When they moved back to Mandurah they lived in the small cottage next to the Brighton Hotel. Eliza had some medical experience and was often called on by the community. She also became the unofficial school teacher, receiving a yearly allowance from the community for teaching local children.

With his brother Charles, John concentrated on farming at first. In the 1870’s the brothers went to the North West to join the pearl fishing there. They had two boats and employed locals as divers.
After four or five seasons they returned to Mandurah where they invested in new businesses – C. Tuckey and Co Preserving Works at Peel Inlet was one of these. They erected a two-storey fish cannery on the eastern foreshore opposite the Brighton Hotel.
In 1880 John left Mandurah in a new seafaring enterprise with a Fremantle merchant. He purchased a vessel and began a trade run between Singapore and Japan. Charles meanwhile ran the cannery very successfully. (Tuckey canned fruit and fish won medals at the Perth International Exhibition in 1881; the Colonial Exhibition in 1886 and the Melbourne Centennial Exhibition in 1898.)
In 1883 John returned to pearling, working out of Derby on his own behalf. In 1884 he worked with Tuckey and Co delivering goods between Mandurah and Freemantle. His interests in Singapore continued meanwhile.
In 1890 their sons Stephen and William were drowned when their boat capsized around Rockingham. One of their other sons had been lost in the same area only a year or so before.
John became  well known amongst Singapore shipping connections. He eventually relinquished his partnership in Tuckey and Co and settled in Singapore. He also travelled to England, Scotland and Borneo.   Eliza and one of her sons  joined him in in Singapore during the 1890s. John died at sea about 1901, after which Eliza returned to Western Australia. She settled in Peppermint Grove and died in 1907.

for more information on this family see http://www.mandurahcommunitymuseum.org/downloads/Tuckey_pdf(2).pdf